The walls and dome of the Hall of Memory, at the Australian War Memorial in Canberra, are lined with one of the largest mosaics in the world. Designed by artist Napier Waller (who also designed the fifteen stained glass windows in the Hall), it was unveiled in 1959.

The mosaic inside the dome depicts the souls of the dead rising from the earth towards their spiritual home, represented by a glowing sun within the Southern Cross.

The figures on the walls – a soldier, a sailor, an airman and a servicewoman – recall the Australian experience of the Second World War. Installed by Italian craftsmen and using more than six million pieces of glass tesserae, the mosaic took over three years to complete.

ICS carried out a major program of conservation works to the mosaic in the Hall of Memory from 1998-2000. This included: 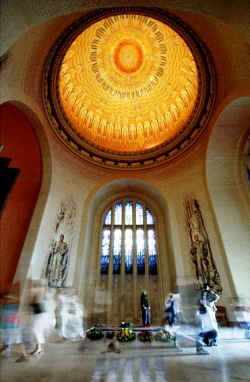 Overview The opening of Barangaroo Reserve in 2015 has allowed Sydneysiders to walk around a part of the Sydney harbour foreshore that had been closed off to the public for more than 100 years. The six-hectare parkland has transformed one of Sydney's oldest industrial sites, stretching back two centuries. The topography of the new park was inspired by the shape...

Overview The Anglican church of Christ Church Bong Bong in the NSW Southern Highlands was built in 1845 on the estate of local landowner Charles Throsby (1799-1854). Throsby’s wife Elizabeth ‘Betsey’ Broughton (1807–1891), mother to their 17 children and one...